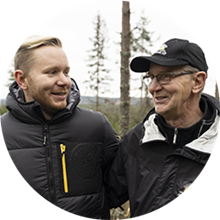 In 2007, Per Erik Sjöström founded the forestry company Hummelbo Skogsenergi AB. The forest has always been an important part of Per Erik’s life, and it’s also where he spends the majority of his time. The forest he owns today has been passed down through many generations.

“There’s something special about the forest. I think I’d have trouble working with anything else where you’re not able to be outdoors in the same way. Even when I’m not working, I’m in the forest as much as I can be,” Per Erik explains.

Today, Per Erik has ten employees and six machines, five of which are from Eco Log. The plan is for his son, Magnus, who recently joined the company, to eventually take over the business.

“He seems to be interested in doing so, and that feels pretty good,” says Per Erik.

Magnus Sjöström, now thirty-two years old, has spent the past thirteen years working in the forest, although forest machines have been a part of his life since childhood.

“I can remember how I’d lay on the decking and play with my toy machines. I’d stand dog biscuits on end that I could fell and forward. Now I have a son of my own who’s just over a year old. It’ll be interesting to see whether he too wants to get involved in forestry in the future,” comments Magnus.

Before Magnus joined his dad’s company, he operated harvesters from other manufacturers. Moving to Eco Log, though, was easier than he thought it would be.

“The pendulum arms were the biggest difference in the beginning. It feels a little unusual at first, but once you get the hang of it, it’s just great. You can level the machine and navigate almost anywhere, even places where you probably wouldn’t want to walk. The crane is extremely powerful as well, so you can get a lot done with a harvester like this,” says Magnus.

In addition to the machine’s handling, Magnus appreciates the contact he has with Eco Log as a supplier.

“You develop a more personal relationship with a company that isn’t that big. Machines break down, and then that contact gives you peace of mind, knowing that the support works in warranty claims, service, and the like. When we last visited Skogsnolia [Swedish forestry trade fair], the thing that most struck me was the family atmosphere at Eco Log. As a customer, I find that a real strength,” Magnus ends.